An archival space for the threads that made it.
Locked
17 posts • Page 1 of 1 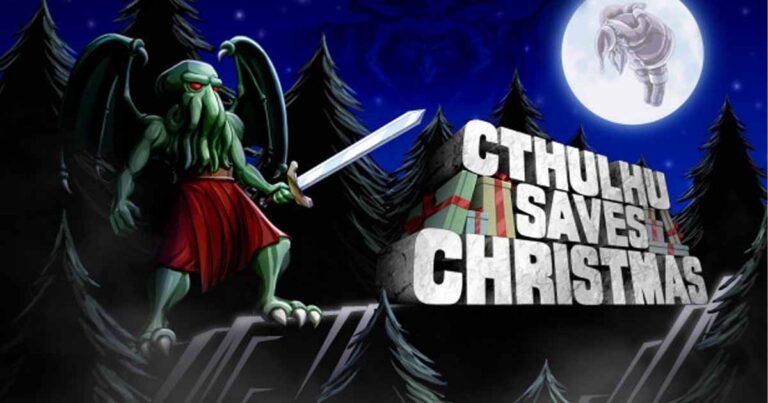 What game is this?
Cthulhu Saves Christmas is a silly JRPG style game that doesn't take itself seriously, and has nuked the fourth wall from orbit. This is a completely blind LP. I have no idea what I'll run into when playing the game. It's also a sequel to Cthulhu Saves the World (I haven't played that either). It appears to be quite short. I plan on having daily releases in order to get this out by Christmas.

Why LP this game?
1. It's the Christmas season, so it seemed fitting.
2. As I joke in the first episode, I have acquired 300 likes on my Facebook gaming channel, and every single one of them is a bot, so I figured a celebration was in order for the milestone.
3. It has been requested in the LP Request thread on Something Awful

Don't you have three(ish) LPs still in progress that you haven't been updating?
Yes, but I think I caught the 'Rona at the end of October. I'm not positive since I didn't lose my sense of taste or smell, and that seems to be the most common symptom. However, I was sick for a few days, and then fatigued like crazy for three weeks. Then I spent the next three weeks catching up on everything I had missed. Now that I'm caught up on real life stuff, I figured I'd get back into the saddle with a fun little LP. That and I'm still dreading the editing that I'm going to have to do for the next Super Robot Wars 2 episode release.

Episode 1: Where Cthulhu Decides to Save Christmas

HE COMES!!!! (to rescue Santa Claus). Let's hope Cthulhu can save Santa in time, otherwise Tim Allen will need to take over as Santa Clause.
Top

Episode 2: Where Baba Yaga is not a "baba"

Now with Baba Yaga (who is a loli and not an old witch) in our party, we move on to beat up a bunch of bad Yule Lads. For those curious, Baba Yaga literally means "Old woman Yaga" in pretty much every Slavic language, and Yaga is just one of many diminutive form of Agatha. And for those curious, Slavic languages love diminutive forms, especially for names. Three good examples in English are William, Robert, and Richard. They have a bunch of different nicknames, some of which are childish, and some are acceptable for adults.
Top

This time, we fight a mouse king. It's like a rat king, but it also has a mech.
We also have Belsnickel in the party now.
Top

Episode 4: Where We Go Caroling!

We fight a Welsh horse skeleton, and then go caroling!

And in about half an hour, I'll be streaming the next episode:
https://www.twitch.tv/Bring_Stabity
Top

Episode 5: Where Chickens Can Talk

We're stuck in an alternate dimension where Cluck Cluck can talk. And we have to deal with some extra-dimensional bells.

And in about an hour, I'll be streaming the final episode (or two)
https://www.twitch.tv/Bring_Stabity
Top

Episode 6: Where Baba Almost Gets Eaten

We brave our way through a blizzard and face off against a child-eating ice giantess.
Top

It's time for the final battle... Or is it? Spoiler warning, it's not. It's time to fight Krampus inside of a giant Christmas tree to rescue Santa. However, we meet a pair of unexpected guests that foil our plans.


And yes, I planned on releasing this on Christmas Eve, and not in the early hours of Christmas Morning (at least in my time zone, it's later in the day for people East of the Atlantic). Oh well. Holidays are busy.
Top

Episode 8: Where We Finally Save Christmas on Christmas Day!

And now for the true(ish) FINAL BATTLE! The Ghost of Christmas Future (which in our headcanon is actually Tiny Tim) is our final opponent. Can we best him? Yes. Without cheating? No.

Thank you to Nweismuller for co-commentating for these last two episodes. A good friend to keep you company makes games even better.

And most importantly, Merry Christmas to all!
Top

Episode 9: Where We Start All Over Again, But We Remember Everything, And the Fourth Wall Still Doesn't Exist!

Did you think this was over?

Turns out, it's not over! NG+ is exactly what I hoped for. The fun writing continues and we get dialogue, and we get to continue building R'lyehtionships, taking the other options we weren't able to take previously, and going towards full completion. You can bet your ass we're going to go all the way.

Releases are switching to a more normal Wednesday and Friday release schedule.
Top

Between being on easy mode and NG+, nothing poses a challenge.

Killing the entire team of bosses with a single tentacle attack was very nice.
Top

Episode 11: Where We Actively Change the Timeline

This time, we actually spare the Mouse King, all towards the goal of building R'lyehtionships
Top

Episode 12: Where We Accept Bribes To Spare Enemies

We reencounter the Mari Lwyd, and spare it's life, so long as it repents by giving us goodies.
Top

Episode 13: Where We Show Off Our Knowledge of the Future, Because it's Our Past

Time to fight Bel again. We also manage to impress everyone with our precognitive knowledge.


I managed to get sick again, so I'll be taking the next week off, as I'm out of recorded material, and my voice isn't up to the task of recording more. If anyone's subscribed to my Youtube channel, it'll just be my old Date-A-Live streams (and the edited content from therein), and new content resumes on the 25th. At least I finally got the next episode of SRW 2 edited, so I can finally release that tomorrow.
Top

So much for resumes on the 25th. I was sick for two days (four if you count the day before when I knew I was about to get sick, and the day after when I was mostly good, but not at 100% yet), and my voice was useless for recording for almost three weeks. Even then, I could do all of 30 minutes of recording before I lost my voice.

Episode 14: Where We Get a Line of Dialogue and Treasure Chest That I Skipped Last Time

We face Gryla again, and I even find a chest I missed the first time through.
Top

Couldn't get to my PC on Friday or yesterday to post this. And my backlog is bare, but hopefully I'll have something ready for the regular Wednesday release. Fingers crossed. (I hate being at no backlog, every little interruption, change of plans, sudden event can cause a missed release.)

Episode 15: Where We Realize New Game Plus is a Completely Different Game

We come back to fight Krampus and Nyarlathotep. However, for some reason Santa isn't captured. And where is that Hohoho coming from?
Top

Episode 16: Where We Suddenly Reach the True End of the Game

It's time to face the true final boss, shatter the fourth wall beyond all recognition, and save Christmas again. For Realsies.


Now that this game and this LP is over, I think it's time to sum up my thoughts. In short, I loved it. The setting was fun, the dialogue quirky, the characters charming, and at the risk of being self indulgent, I loved giving them all silly voices. I think I really got Cthulhu's voice down.

I only really have two complaints. The combat system wasn't my cup of tea. I had more fun on easy mode than on normal mode, just because it let me get to the story and dialogue faster while breezing through battles. The second downside is that there is a hard stop at the end of NG+. I was hoping we could continue to NG++ and NG+++ and build more R'lyehtionships, but it seems to not be in the cards. That unfortunately makes me unhappy, seeing as I'm a completionist at heart, and I really like the R'lyehtionship dialogue.

For anyone that was playing along, just watching, or has already played this game, what's your opinion?


With this game suddenly and unexpectedly over, my Wednesday/Friday release slot will be replaced with my next LP: The Spirit Engine 2. Nweissmuller has been requesting that I play that for two years now, and I figure it's about time to oblige. The first two episodes have already been recorded, and the first one will be released this Friday. Look forward to it, because it is already great so far.
Top
Locked
17 posts • Page 1 of 1