The Mayor of Flavortown

The Mayor of Flavortown

by Micolithe
idk man lets break in the new digs, how about lets talk about food - we need it to live, i think?

why not post about stuff you're making for dinner, recipe ideas, cooking questions, etc

Anyway my latest culinary creation was a sourdough crust pizza that came out fucking AMAZING. I started a sourdough starter back in march when covid hit and my job went on mandatory-work-from-home.

Sourdough pizza dough as defined by this recipe, made in advance, put in the fridge overnight where it basically did not rise, and then i proofed it in the oven with the light on but the oven off, covered in plastic wrap for 3 hours.

The actual pizza is pepperoni, chopped bacon (chopped while it was slightly underdone since it had to go back into the oven anyway), low-moisture Weis store brand mozarella, and vodka sauce because its the jar of tomato sauce that I had open.

I did not do the things the recipe said about par-baking the crust and then topping it because that's fucking stupid. Also, the temperature this says is way too low, if you want to get a good crispy pizza crust you need to bake at a really high temperature so I did 500F for 20 minutes (and then it didnt look done so i let it keep going but didnt reall time that part). The recipe also calls for unfed sourdough, but I did not have enough starter, so I had to feed it first and wait a bit. 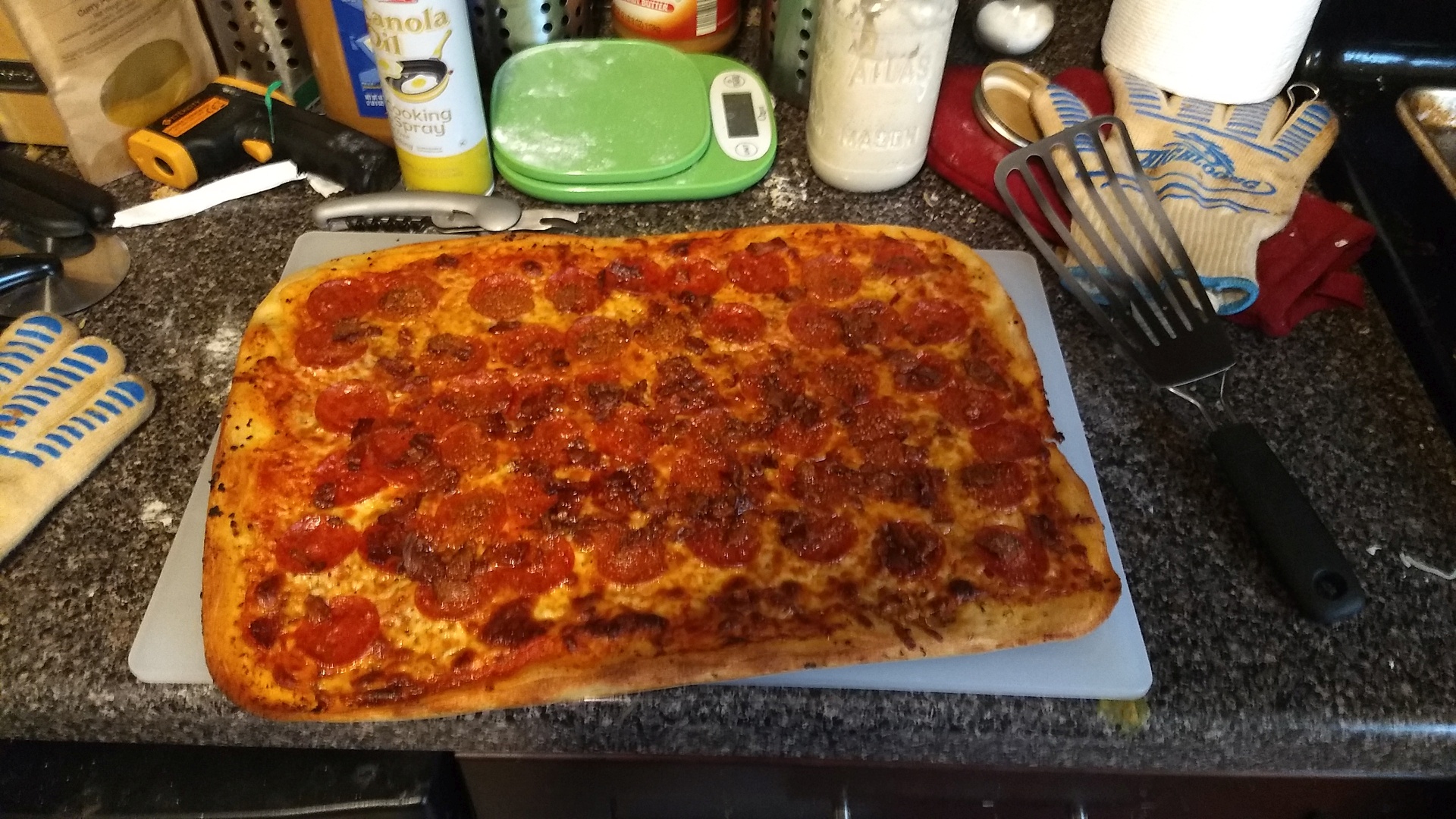 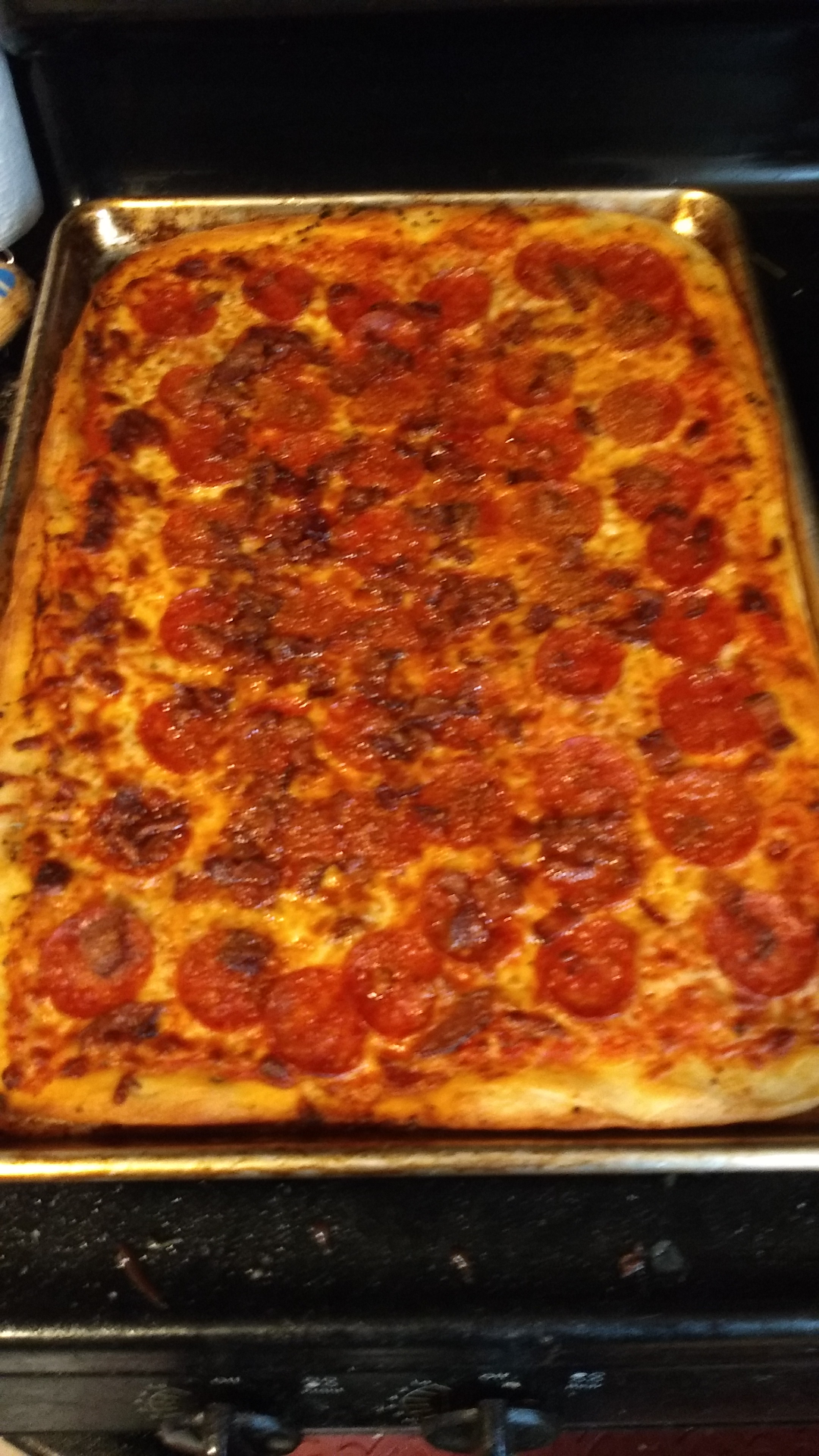 by ThornBrain
I've been dipping my toes into cooking more lately. Current favorite lunch is brown rice and steamed broccoli and carrots. Just need to keep a better eye on the rice so it doesn't burn. 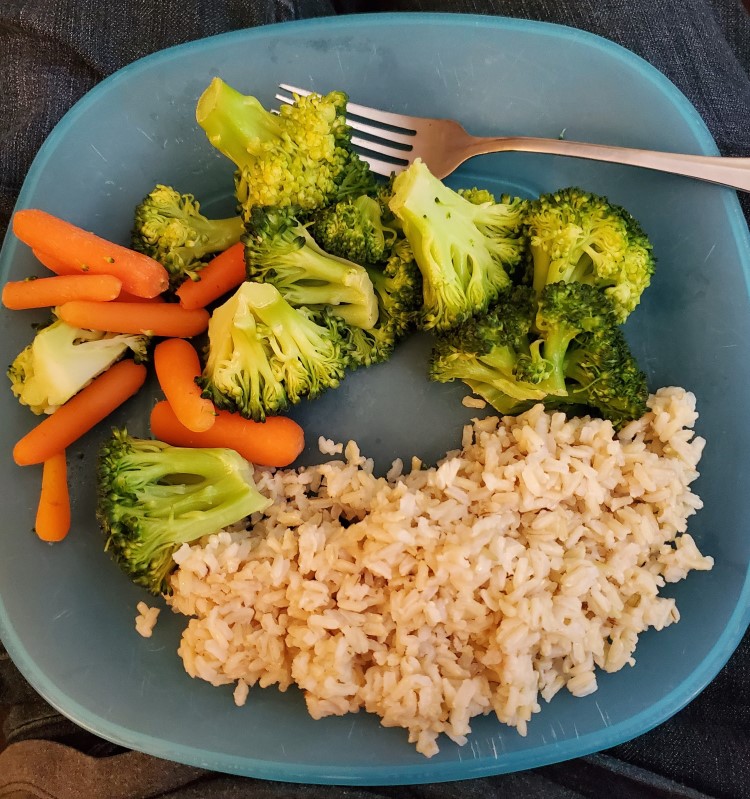 It comes out brighter than that one picture. My room just encourages yellow whenever I take pictures or record video in it.

by Micolithe
Ever since I switched to doing my rice in an instant pot I no longer have to worry about it burning, it's been so nice. It's weird though, certain brands of rice dont work as well in a pressure cooker and I can't figure out why. Iberia white rice, which I think is distrbuted by Goya but dont quote me on that, works perfectly.

by ThornBrain
Yeah we do Jasmine in a pressure cooker too, I'm just trying to get in the habit of having complex carbs over simple. Boiling brown rice in a pot usually works out well- I just got complacent last time and thought I could leave it a full half hour without checking on it.

by Gordon Threemen
In my house we tend to have a lot of eggs in the fridge at one time, so if I'm getting any more experimental than just "dump things together in a pot and boil, sometimes with another ingredient heated in a pan", it usually involves them. We also like to have a lot of the fancy Italian breads from the Walmart in the next town over. 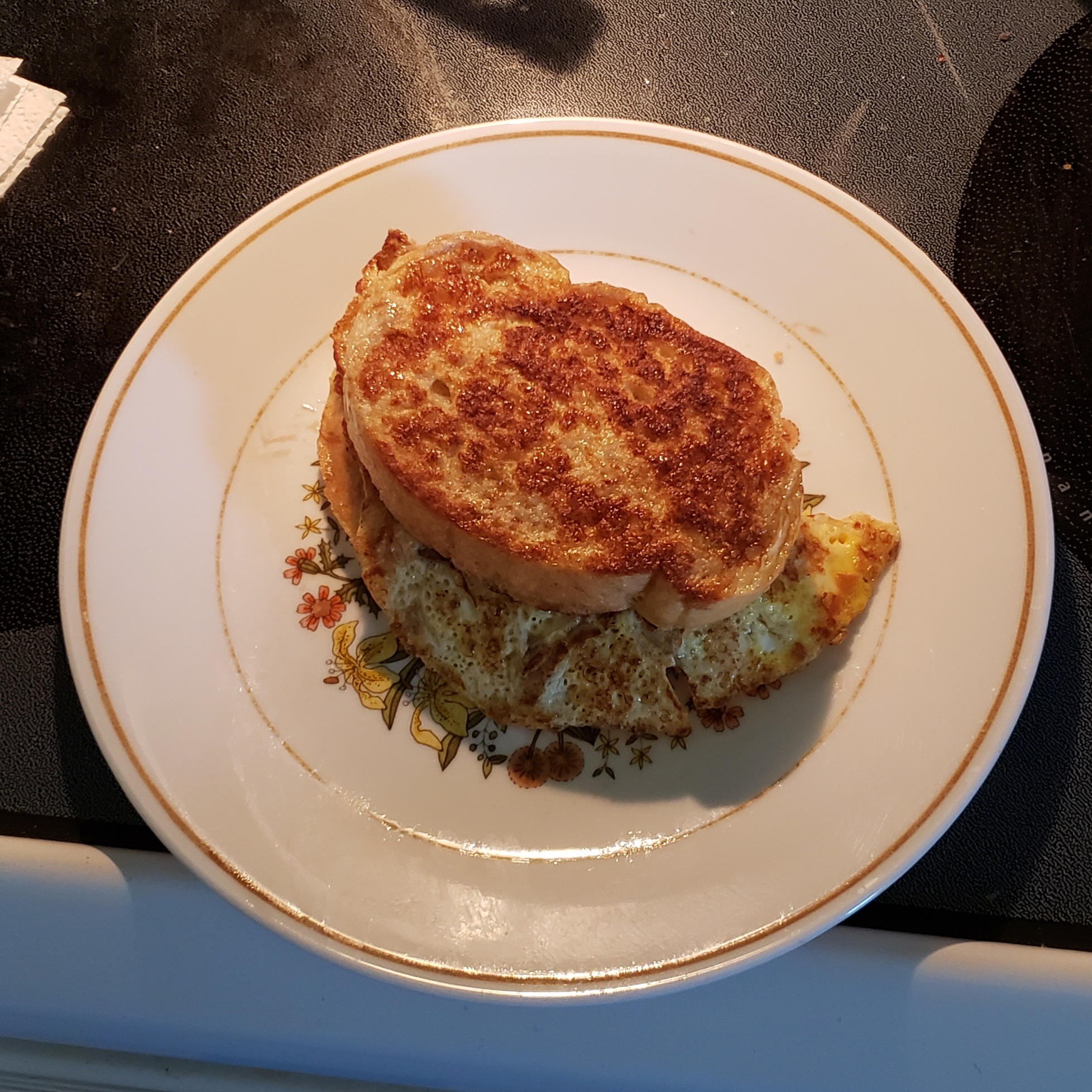 Put the two together, and I get this. Whip two or three eggs together with milk, dip the bread in and brown it on both sides, then once I've got enough slices (I usually do four at a time) cook the leftover egg to make a sandwich - depending on how much leftover egg there is I could probably make two sandwiches, but I usually just dump it all in at once because I've already eaten half the slices on their own while waiting for the others to cook. Also not shown: shredded mozzarella I melted over one side of each slice. Usually I'll add about a teaspoon of vanilla extract to the eggs too, makes it smell amazing, but I haven't had any of that for a while now.

by Micolithe
this is just a friendly reminder that if you are baking a loaf of bread, don't forget to grease/cooking spray your stainless steel loaf pan so that when you try and take the bread out of the pan you dont end up with a top half and a bottom half

i almost always use parchment paper so i'm surprised i didn't do either one of those things and my bread suffered for it. 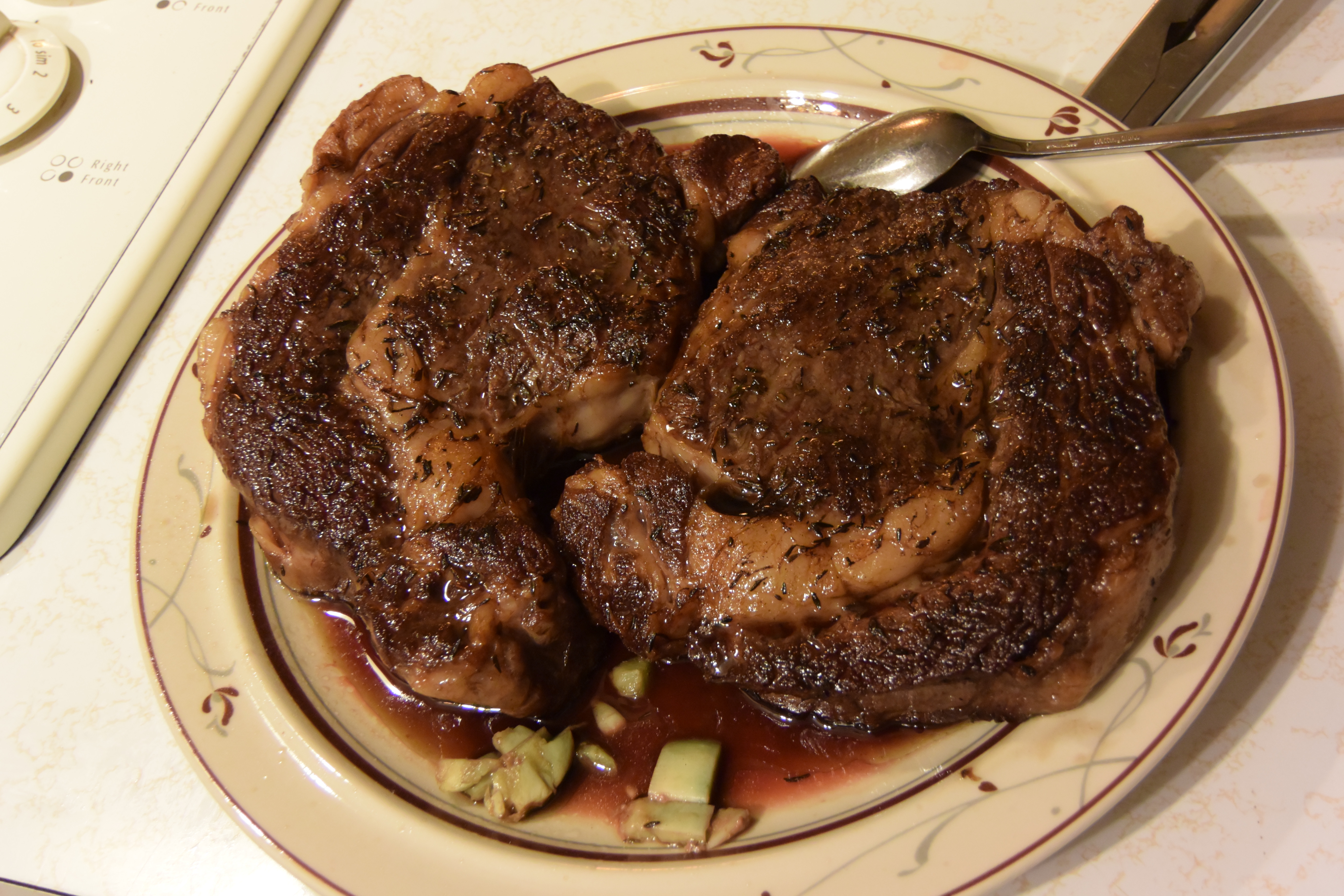 holiday ribeye
MSG, salt, thyme, crushed garlic, sealed and puddled at 135F for 2 hours, pan seared with some butter, then transfered onto bag juices with some pan juices spooned over.

by Tanegashima
All right, so my recipe for Korean BBQ of the beef variety!

Step 1: Get good beef ribs. If you can't get beef ribs then thin-sliced steak will do.

Step 2: Figure out a way to acquire sake or mirin. An Asian grocery store should have the latter. You might have to order online.

Step 3: Mix soy sauce, sake/mirin, diced garlic, some sliced up green onions, a small amount of grated apple (this helps to tenderize) and either some brown sugar or a bit of honey in a good-sized bowl. You want enough to cover your meat.

Step 4: Put that beef in the marinade and leave it for at least 6 hours, but I would suggest overnight for peak flavor.

Step 5: Take it out of the marinade and pop it on the grill. If you don't have a grill I guess you could cook it in a pan, but it won't be as good.

by Micolithe
Just as an update to the pizza situation: i did it again tonight and this time i finished it with a 3-4 minute run under the broiler after the 20 minute bake time and hooooo boy i've got this shit sorted OUT it was SO GOOD

I did, however, fuck up, because I did a cup and a half of water instead of half a cup like i should have and was like WHY IS MY DOUGH SO WET THIS DOESNT SEEM RIGHT and basically added flour until I had a double batch. So the good news is I have another batch of dough in the freezer ready to go whenever.

by Micolithe
Finally pulled the trigger and got some mason jars for my sourdough starter.

I was using an old classico tomato sauce jar that i had cleaned out and it was very clearly too small, every time I fed the starter it just made a huge mess.

So today, I was at the wal-mart and picked up some jars. The only 4-pack they had was like, amber colored glass, like beer bottles, which makes it hard to see what's going on in side but oh well, I can deal with that.

Anyway, these are the new digs: 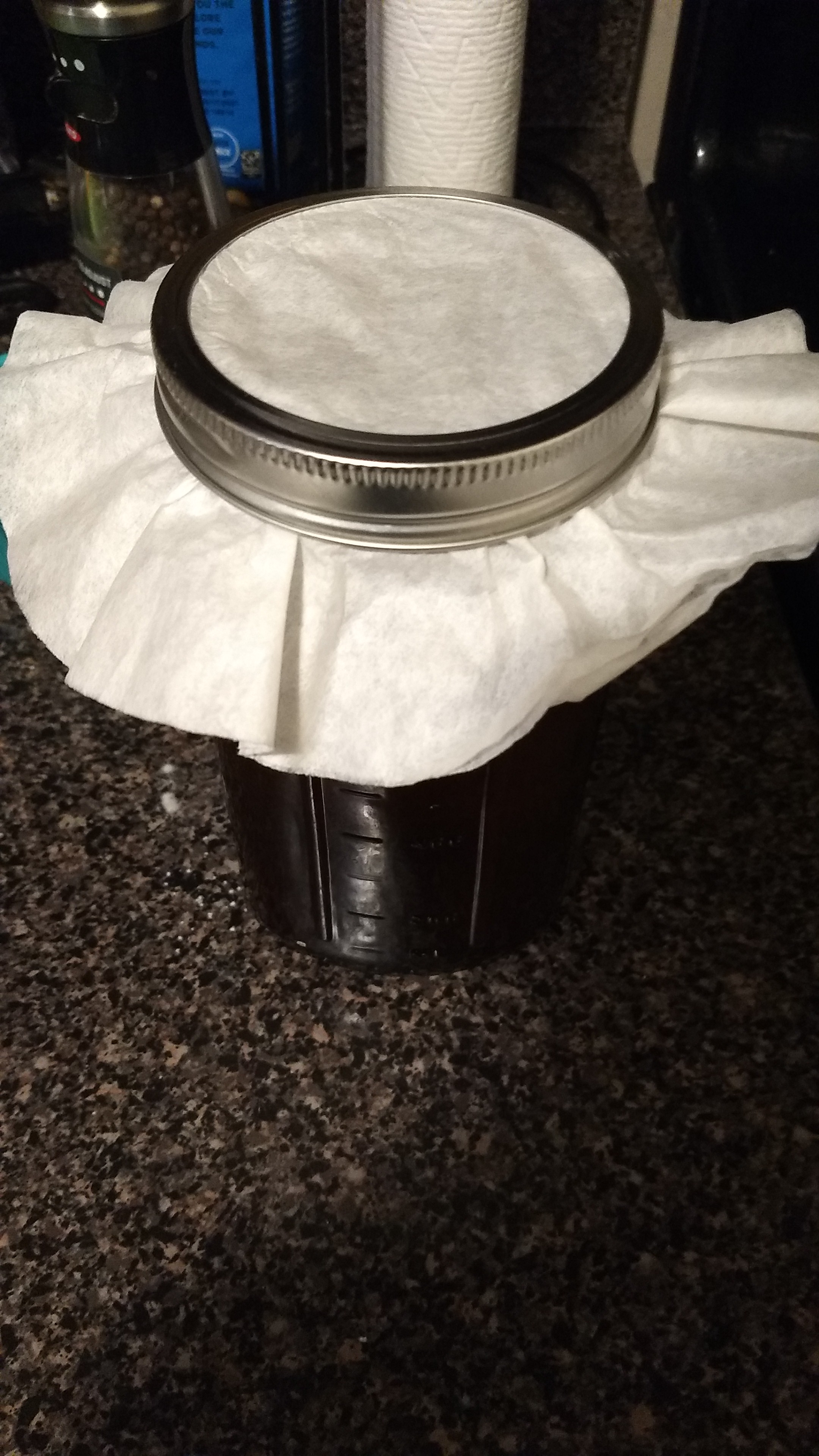 by Tanegashima
A simple pasta combo that works somehow:
-Penne
-Olive oil
-Walnuts
-Parmesan
-Some of that good black pepper, the kind in the grinder

You could probably add more stuff, but even that by itself is tasty.
All times are UTC
Page 1 of 1