Amazing writing, I was expecting a THATS NO MOON joke but no one's in the mood for that

They are in the mood for loot though, blessed boxes of joy

Lore-A-Lua is either hell on earth or a joke, I was running Destroy/Gun Trick/Hacker for this myself and once again, it must be said, Trash Pickup is an absolute monster of a buff, completely tearing her gimmicks apart and enabling continued offense at a breakneck pace, Bush Trap feeding off Counters is nice and all, but it just can't be overstated how much action economy Trash Pickup gives
Top 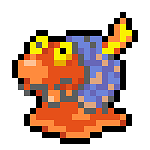 Destroyer is pretty much the most broken class in 2020. It just deals out shitloads of damage, more than any other class in the game. In fact it was the class the developers recommended for solo runs.

Counters are absolutely ridiculous and a big difference between DS and the later 7th Dragon games was that in DS, every enemy (except for 1 boss that was not even a dragon) could only act once per turn. Since all dragons now attack twice per turn, Hard Target essentially deals octuple damage, on top of protecting the rest of your party, and is a free 2-Depth.

Even if you have a luvshock Hacker in the party denying the enemy turns, that's not even a detriment as Destroyers can just swap to spamming Quintets instead. And the way SP works in the later 7th Dragon games makes it far easier to spread out your skill build instead of having to treat every last bit of SP as a precious resource.

The base infliction rate for a Destroyer inflicting D-Depth is 100%, though in practice it'll either be 50% or 45%. Random encounters multiply the infliction rate by 0.5, while dragons and bosses multiply it by 0.45. I don't even know why that 0.05 distinction is there. Only 3 enemies break this rule. D1 and D2 have a multiplier of 1, so they're guaranteed to be smacked with D-Depth after a punch. (Most likely so you can actually use Forward Punch and see what they can do.) The hopeless boss fight version of War Cry is literally the only enemy in the entire game that's immune to D-Depth. And every other ailment, frankly. Even Bloom Seeds can get hit with D-Depth despite being immune to all other ailments.

All of the guaranteed D-Depth skills just bypass infliction calculations. So not even immunities (if they existed) save enemies from being inflicted with it. Funnily enough, God Hands in VFD work a bit differently for some reason. Jab and other "guaranteed" infliction skills just have their rates set to 200%. In practice this doesn't really do much, as the actual main change was that they removed their innate ability to inflict D G-Depth and just set it to 100% for various attacks, so basic attacks can no longer inflict them outside of using God Charge. (G-Depth multipliers doesn't go lower than 0.5x in VFD, and no enemy is immune.)

Fun fact, Destroy React is the only react skill in the entire game that's RNG based. All other reacts just have the chance set to 100%. This was likely because the condition that sets it off is far more reliable than any other react condition. (Score a crit with the Trickster. Hack into an enemy. Or make sure an enemy takes off enough of your Samurai's life.) And you can get extra turns within extra turns, (capped to 3 after certain setups in DS could generate infinite extra turns.) so you can easily rack up 3 free extra turns to deal damage with, and can start slamming down Quintets right off the bat.
Top

Destroyers are, indeed, that broken if any hypothetical people were still doubting after all of that. With some game knowledge they pretty much destroy (heh) what difficulty most normal dragon encounters have since the AI in those is so heavily patternized and they have the highest physical attack in the game just to make their counters and Quintet even more disgusting than those multipliers look. And of course Destroy React is just ridiculous. About the only issue (if you can even call it that) is how finnicky getting milage out of Rage Bomber is but tbh they don't even need that to be the most broken class in the game.
Top

Destroyers good, Death's Door is wonderful, and since its just a buff, you can just throw it up whenever and enjoy the safety net for the rest of the fight, especially because like way too much of the Destroy skillkit, it costs 0 MP for some fucking reason

Destroy On Sight is just rad, as you said, its free real estate, but damn if it doesn't make its value heard in full when it just wipes randoms or gives you a nice upper hand at the start of a boss, its a power thats utterly unnecessary, but delightfully mighty to have regardless, it truly impresses the dominant physical might of a Destroyer just from their presence
Top So no matter how life may throw wrenches in my path, I'm going to continue being positive! Let's Positive Thinking, a wiser reporter than me once said.

You see, Captain Inomiko, from the readings we've taken, it appears you're unaffected due to antibodies you generated during your month-long coma.

This is pretty much the in-universe reason why 2% max life as Bloom damage is no longer a mechanic and the Bloom is just decoration in dungeons. Evidently the world of Eden had weaker immune systems. Imagine if you had to deal with that mechanic in the post-DS games.
Top
Post Reply
128 posts