The Right Men in All the Wrong Places: Let's Play the Half-Life Anthology

I hope you folks are ready for some ball-busting action, because it's time for a chapter that's just plain nuts.

In all seriousness, the Gonarch's design was 100% intentional because the folks at Valve had and still have, to some extent, the maturity of college frat guys. According to Valve's co-founder Gabe Newell, people in design meetings could just shout out any ideas that came into their heads, and they would be seriously considered as part of the game. This kind of open forum-based approach where basically anyone could have a say in the design process means that Valve was able to take a lot of risks that a more committee-driven game would have dismissed because they were too bizarre or open to scrutiny. The Gonarch in particular was a design that certain team members were worried about, wondering if it was too risque, but since Gabe was into it, they kept it in the game. Good thing too, because if there's one thing that a lot of people remember about Xen, it's that time that you fight a giant testicle.
Top

When I was playing it Gonarch's Lair annoyed me more than I'd hoped. Half Life never really did the "run away from the oncoming death" setpiece before, or at least a version of it that lasted more than a few seconds, and considering the player had already fought off Gonarch once before it took me a few deaths until I caught on that I needed to run away. Some of those leaps in the crystal cave didn't seem marked very well either so the whole thing was constantly teetering on and off the edge of frustrating for me. Some of the visuals are really nice, chasing the fire to the final arena is great for example, but I don't think running away as much as you do was the right path to go.

Interloper is another example of taking a concept that already existed and expanding it out into over an hour of content. The series starting with Half-Life 2 is going to reveal that Vortigaunts are actually a benevolent force in the universe, so with that foreknowledge, the chapter has been reframed as a Vortigaunt sympathy tour, with them being beaten, mistreated, forced to operate the devices that produce Alien Grunts, and it's heavily implied by the game that they are actually the fuel for the process. The enslavement has always been a part of the series, but as far as them being linked directly to Alien Grunts, that's more of a fan theory that Black Mesa decided to run with, based on the fact that Grunts have the third arm in their midsection, despite being grown in vats. It's interesting to note as well that Alien Controllers also have the third arm, so wherever they came from, this treatment has been going on for quite some time.

Around this time, we're also being given some interesting implications concerning the leader of Xen and, depending on how you interpret the syntax, maybe Gordon Freeman himself. The line "We are their slaves" could be referring to any number of people and it would still be applicable. After all, we do know that there is a mysterious man tracking our movements, and we've been railroaded down a specific path all game long, so how do we know for certain whether where we're going is our own will or just someone else's larger plan for us? The series likes to leave some questions up in the air for people to draw their own conclusions.
Top

Is there any hint that green juice is vortigaunt juice? I just figured it was nameless alien slime.

And man, I tried my hardest to not kill any vorti's in Xen but I must have clipped a few here and there. You mentioned that it is shown somewhat in the original that the Vortigaunts are slaves but against the rest of Xen its a pretty small moment and I do like that Black Mesa closes the semi-plot hole of the status Freeman has with the Vortigaunt's in 2 - besides some unnamed prophecy or something. It may be somewhat incidental but you/he really does wreck a lot of stuff between them and their slavers.
Top

I don't know if there's strict evidence for it, if I'm going to be honest. My reading on Black Mesa indicated this was supposed to be the case, so I ran with it, but I didn't see any explicit demonstrations of the Vortigaunt -> Grunt process. Maybe I just wasn't seeing the right tube or the right tank. Still, it does sort of feel to me like I'm making unsubstantiated remarks based solely on fan theories.

As for the original game, all you see are egg-like containers with Grunts inside being rolled along on conveyer belts, which we'll be seeing in the next update.
Top

You know those green crystals we saw near the end of the last update? They're the focal point of the rest of Interloper, presenting us with situations where we can just go crazy with the Tau Cannon and Gluon Gun (but mostly the Gluon Gun) and not have to worry about ammo consumption. There's a section of Half-Life 2 where we're also suddenly gifted with a ridiculously-powered weapon and asked to just go hog-wild with it, so I assume that this is a direct homage to that.

This also presents us with the last obstacle of the game: the Ascension, with a song appropriately titled by the same name. The artist who did the soundtrack for all of Black Mesa is Joel Nielsen, and while he leans closer to shredding guitars over the original's more electronic sound, his stuff can vibe just about as well as the original, even if the mood is completely different. If you can hear anything over the lasers, the explosions, and the shrieking, this is one of my favorite songs in the game.

My apologies, by the way, but this part of the game is really unkind to the framerate. Black Mesa was designed on the Source engine which is great for a number of things, but processing a lot of physics objects all at once isn't one of them.
Top

Anyways I think Interloper gets a little long in the tooth between quality control, as you put it, and the final elevator ascent but hardly game breaking-ly so. And that elevator does make up for it. It is rough on hard but that good kind of rough.

And in the immortal words of Ross Scott: https://youtu.be/DCwu9G0epYk?t=747
Top

The "Ascension" song is very recognizably the song they use in the Steam release's first trailer*. It's such a good song that it's been teasing me when some of the highlights of the song started drifting in to the Xen soundtrack. It's not a clean take, but it is better balanced than an actual game in progress.

* If this is your first exposure to the Half-Life series, don't actually look for it until Blastinus posts the proper final episode-that trailer spoils the whole game including stuff the LP hasn't shown yet.
Top

So...the Nihilanth. Brainy voice guy's looking a little not-so-healthy there, and in fact, general impressions were that he was kind of weird and even a bit pathetic. Then again, FPS final bosses are sort of hit or miss in general, even today. It's hard to create a challenge for a player that isn't just "shoot it a lot more than the average enemy". I think that the decision of the Black Mesa team to turn it from a gimmick fight to a straight-up brawl was probably the right call in the end, since platforming, while improved for this version, is still not the game's strongest suit.

Story-wise, the resolution to the Nihilanth fight provides a number of questions and not a lot of answers. Who is the G-Man and how does he have seemingly supernatural powers? Who are his employers and what is their stake in the conflict that occurs throughout the series? How did the Nihilanth know enough about him to realize that he would deceive us? Did the G-Man extend the same kind of "offer" to him that we got, where he was effectively forced into doing the employers' dirty work? Valve tended to put a lot of ambiguity into their storytelling, which is perfectly on-brand for the kind of stuff that was airing at the time. Much like the X-Files, you can get a lot more engagement if you don't tell people everything, or much of anything at all, because their imagination will tend to fill in the blanks for you.

I'll be taking a short break to start recording Blue Shift. In the meantime, I'll be doing a short feature on Half-Life Uplink, a cut level released as a free demo for the original Half-Life 1. Thanks to everyone who's stuck around so far.
Top

One last problem I had with Black Mesa? Don't tell me you're sending me into a battle I have no chance of winning and then not even giving me the chance. Give me back me weapons and let me reenact the end to Halo Reach

Ok sure there's cheats and people would use them and probably break the ending somehow but still.
Top

In counterpoint, playing out the refuse ending (and having a hope of survival, even if by running away for a while) would turn Gordon into Doomguy, and he's got his own series.

Thanks for the Black Mesa run, and I'll be looking forward to Blue Shift!
Top 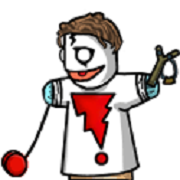 Some thoughts on Xen: I think they redeemed it from being the utter shit show it was on original release. I remember playing this through originally, basically pre-internet (so no spoilers or guides) and basically gutting through it and hating the entire thing. The resource constraints. The constant low health scenarios. Terrible visual indicators on what you're actually supposed to do (it was also dark as hell but that might have been my 3dfx card). All this I recognized without an internet group think saying Xen was bad since this predated me really being on the internet.

And the new one, it's not perfect obviously, but it still looks dang good. It's clear, understandable, improved in nearly every respect. I will agree that the Gonarch is a stumble, both thematically and in implementation. The same urgency doesn't seem to be there.

The Nihilanth fight, fuck that original fight. I thought landing in the head and crowbarring him to death was the only way to beat it, because you had no ammo left for anything else.
Top
Post Reply
52 posts