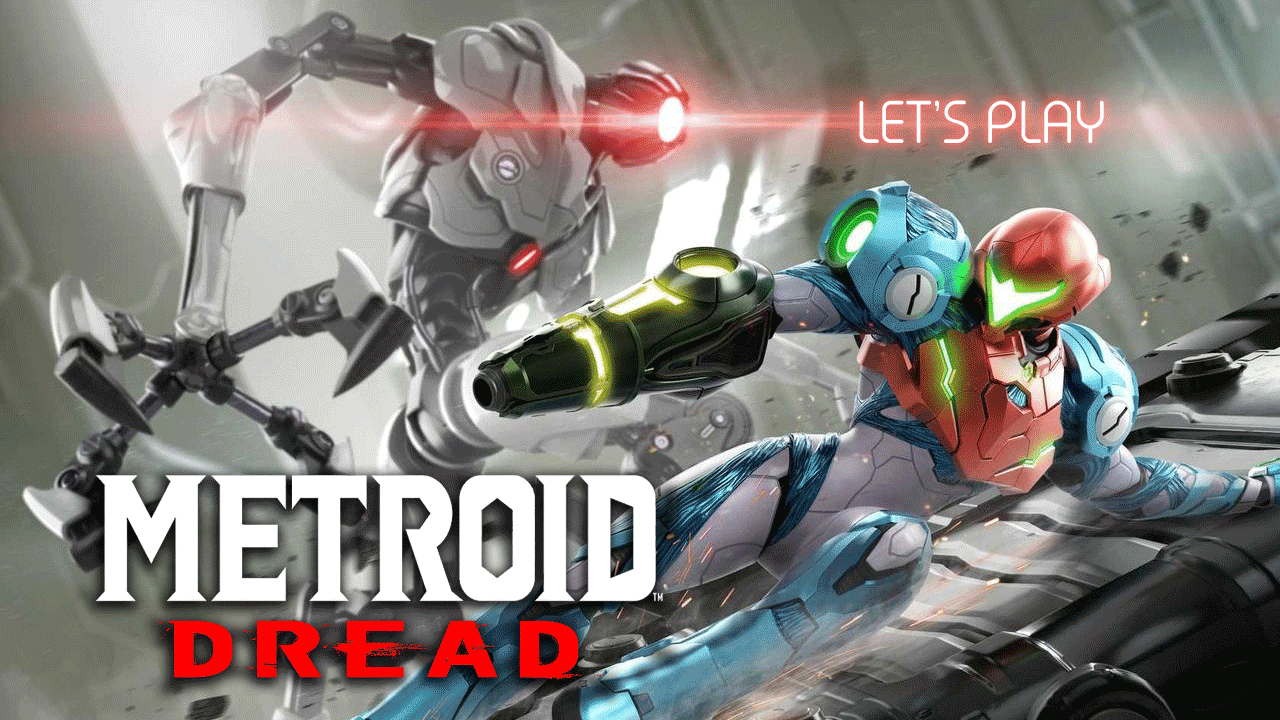 Metroid Dread is the 2021 installment in the world famous Metroid series of games. Metroid Dread, technically also Metroid 5 is the sequel to the 2002 game, Metroid Fusion and represents what is said to be the end of the Metroid saga as well as the first new Metroid game in its signature 2D style in nearly two decades.

Samus must wander into the depths of the planet ZDR as she uncovers the mysteries of the civilization that lay there and pursued by the menacing E.M.M.I set of robots.

Following our forays through all forms of Metroivanias, starting with Symphony of the Night but getting to Super Metroid, Metroid Fusion and Hollow Knight, Tea and I are incredibly excited to be able to tackle this on release and I will attempt to bring my own brand of (high?) skill and complete idiocy to this new Metroid installment.

To what extent does Dread learn from its predecessors. How much has it taken on from the imitations and kings of the past decade's Metroidvania revival? Will it stick to the linearity of Fusion? Will it lean into the freedom of Super? Can it indeed evoke its titular dread in us as we play through? All these questions and more will hopefully be answered as we lend our ever critical eye to this hopefully excellent new game.

From the Desk of Yorkshire Tea

I’m sure Nat was expecting some lengthy essay here, painstakingly scribed out into the small hours of the morning, wherein I would seek to establish the significance of this LP and what it represents by delving into all manner of topics – the weight of time that’s come and gone since the release of Fusion in 2002, the evolution of the genre since then, the emotional resonance the Metroid series has for us, that kind of thing. All to explain our hopefulness, our expectations, our apprehension and worry at whether Metroid itself still has a place in the world of metroidvanias.

This is not that kind of introduction. For one thing, anybody who’s reading this LP has almost certainly mused on those matters enough since Dread’s unveiling earlier this year. More importantly, ~~poor timekeeping~~ necessity compels me to write something shorter... but maybe that's for the better. That other kind of introduction may have been appropriate for Hollow Knight, where I knew what to expect, where the atmosphere and tone of the game practically demanded that sort of academic precis. I don’t know what to expect with Metroid Dread, and from what little I have allowed myself to see of trailers and screenshots I can tell that its atmosphere is going to be radically different.

Metroid Dread feels like the sort of game where we’re going to be thrown right into it, sink or swim. A game that almost doesn’t want to us to dwell on it beforehand too much, but to go right in and get down to business, to approach it on its own merits and let it speak for itself without the baggage of history. The fact that this is supposedly the end of the Metroid saga shouldn’t be entering into our heads at the moment. It doesn’t even really feel like it’s important right now who made it. I guess what I’m trying to say here is that this game, the story it wants to tell and the feelings it wants to evoke, had to exist. It feels like we’ve been asked to go in and help Samus finish things for good. We’re here to do a job.

Maybe Hollow Knight wasn’t the culmination of our road trip into metroidvania country. Maybe Dread is… or maybe it’s an epilogue where we walk away feeling like anything could happen next. Maybe it’s a new beginning, both for the genre, and for the series. Not an end.

This is, by necessity, initially a completely Blind LP but I imagine over time Yorkshire Tea will race ahead of me and thus be able to offer guidance to prevent me from wandering around in circles for too long.

Episodes will release on Monday, Wednesday and Friday at 11pm BST/GMT and 6pm EST/ET as we accommodate for daylight savings. There will also be a cheeky sneak preview episode up on Patreon for those who want to get at it.

Art and banners, will, as ever, be handled by the amazing Bifauxnen.

The SA Cross Post Thread - In case you want to speak about the game to our regulars on SA!